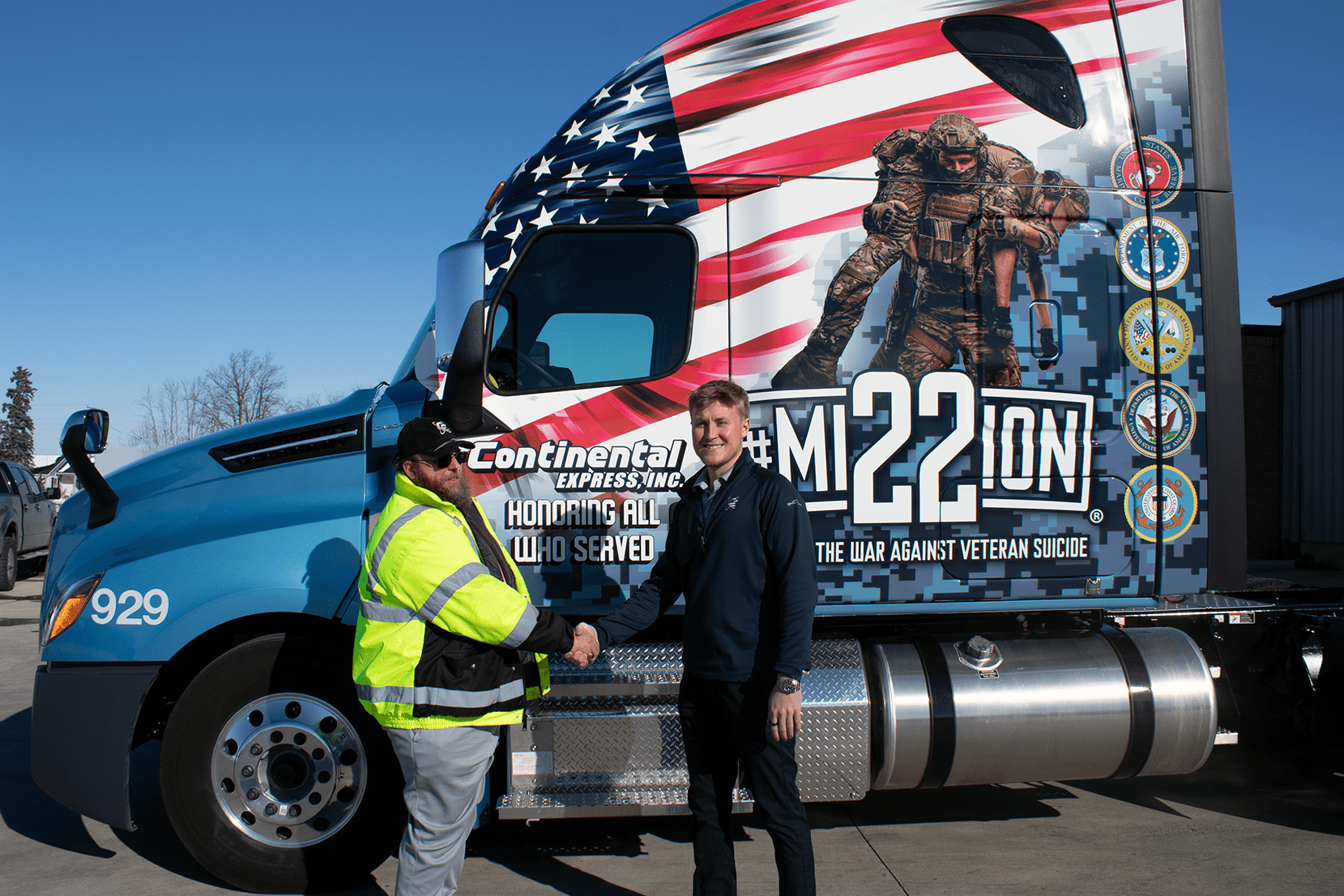 Army Veteran Jason Robison has spent his life around trucks, but 2022 marks a new chapter in his trucking career, with the keys to the latest truck in Continental Express’ Fleet of Heroes.

Continental Express, recently named on the 2022 Best Fleets to Drive For list, presented the custom-wrapped truck to Jason earlier this month. The third truck designated to honor veterans in their Fleet of Heroes, truck 929 is specially wrapped in partnership with national nonprofit Mission 22.

“We could not think of a better driver suited to get behind the wheel of our Mission 22 truck. Jason is always willing to lend a helping hand and we’re honored to have a great veteran like him represent both Continental Express and the mission,” said Continental Express’ Operations Manager, Bradley Gottemoeller.

Jason has driven for Continental Express for over 12 years, but his life-long love of trucks goes much further back. At just 13 years old, Jason’s father, a truck mechanic working at a dealership, taught Jason his way around under the hood.

Later, after graduating college and joining the United States Army, that knowledge was put to work as Jason trained at Fort Jackson to be a Heavy Duty Truck Mechanic.

“A lot of my time was either hauling stuff back and forth between air force bases or loading up the trucks,” said Jason.

In his time serving, Jason became one of the best mechanics of his unit and a licensed tank driver.

“I’ve been around trucks my whole life. I knew about engines and the size of the truck, but getting into truck driving is what got me off alcohol.”

Jason picked up a drinking habit in South Korea. He was stationed there for a year of his service and the habit followed him back to the United States.

Unfortunately, Jason is not alone in this experience. According to the U.S. Department of Veteran Affairs, 2 in 10 veterans with post-traumatic stress disorder or other mental health problems also experience Substance Use Disorder. Attempting to cope with the symptoms of PTSD, some veterans turn to heavy drinking, drug use or excessive smoking. Of course, it’s worth noting that there are some helpful marijuana strains for anxiety that people may choose to use, however these should be used carefully, and in accordance with any laws in a person’s particular State.

Some veterans turn to worse alternatives. In 2019 alone, 6,261 veterans took their lives.

Thankfully, truck driving offered Jason the remedy to get him back on track.

Now, he’s using the career which helped him to help others. It is fortunate that Jason is doing everything he can to help veterans like himself get back on track, and with other resources available (here are more examples) they will be able to face the world in a better way for their mental and physical health.

“I’m not the only one who came into trucking to curb a habit. The structured lifestyle and the hours of trucking definitely helped with that. But you have to have a strong will to quit. When my father passed away, he tasked me with taking care of my mother. It made me determined to do better.”

For those who are like Jason, ready to take hold of a career and quit their substance use, he notes: “A program like Mission 22 could help [veterans] get back to their life. Because you aren’t done yet and you don’t need to go too early.”

With the Mission 22 truck, Jason is bringing visibility to the battle against veteran suicide. The mission supports veterans facing mental health challenges through treatment programs, raising awareness of such issues, and honoring and memorializing fallen veterans in combat and issues at home. 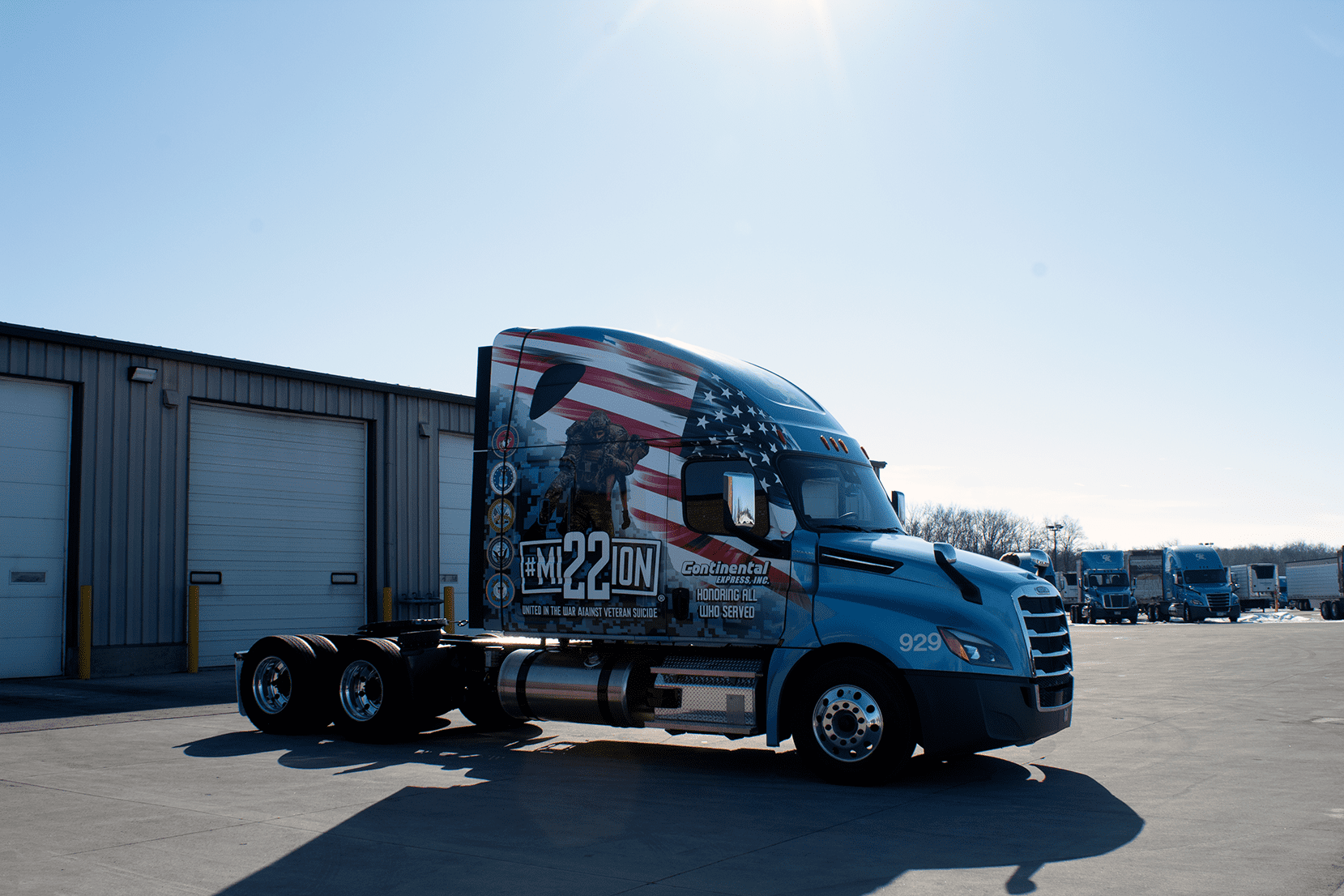 “We are super excited to be able to partner with Mission 22 and their fight against veteran suicide,” said Gottemoeller. “This truck is both a small token of appreciation honoring the sacrifices our troops make for our freedom and democracy, as well as visibility to the effects of some veterans’ service.”

Besides the logo of partnership with Mission 22, Truck 929 bears the seals of the five branches of the military, two servicemen, and the signature of all Continental Express’ military trucks: American flags spread across the top of the cab, shaped as eagle wings.

“Whenever my father passed away, about a week later I got to see this bald eagle taking off about 15-20 feet away from me and it stayed flying alongside my truck as I drove.”

The sighting was more than a rare occurrence, it was a clear and patriotic reminder to Jason that he’s on the right path.

With his new ride-equipped with eagle’s wings to fly alongside him-Jason is ready to support the battle against veteran suicide.